Italtile has strong fundamentals at an attractive price

To improve our chance of investment success for clients, we have a developed a detailed but practical checklist that is informed by our long-term value investment approach. In this article, we explain how we think about some of the criteria on the checklist using the example of Italtile. We first invested in Italtile in 2014. Over the past year, due to the company’s stable and strong earnings growth, we have taken the opportunity to increase our stake in Italtile while the share price has lagged the market.

At Denker, we have a checklist of what we look for in potential investments.

In October 1935, Boeing’s new bomber Model 299 crashed during a test flight, killing both pilots. An investigation followed, which found that the reason for the crash was a very simple thing – the control lock had been left in place. This gave rise to the flight checklist (divided into four categories of take-off, flight, before landing and after landing) to improve reliability and increase the margin of safety for all flights in future.

At Denker, we have a similar checklist that helps us avoid potential losers in addition to finding possible winners when it comes to picking stocks. This list is informed by our collective experience and our investment philosophy, as explained by Madalet Sessions in her article.

Our checklist can be broken down into three categories.

Like people, some companies seem to be blessed with a ‘lucky’ gene. They always seem to be doing the right thing with better-than-average results. One can call it Yhprum’s Law, Murphy’s Law spelt backwards; if anything can go right, it will!

Italtile is a South African tile and sanitary ware retailer, with a respective market share of a 43% and 15% in each. With five factories making a total of 47m2 of tiles each year, it is also the only significant manufacturer of tiles in South Africa. South Africans currently consume one square meter per person, which is well below our emerging market peers of two square meters per person. Through its nationwide retail branches (branded CTM, Italtile and more recently TopT), Italtile is positioned to capitalise on favourable long-term growth prospects by being able to supply fashionable tiles at an affordable price.

Italtile developed the TopT store model to offer a limited range of very well-priced tiles and sanitary ware for the mass market. This new concept was the brainchild of the current CEO, Jan Potgieter, and in just over five years the company has already opened close to 80 stores.

Due to its strong and vertically integrated position, Italtile has been able to generate an average return on equity of 28% and growing headline earnings per share (HEPS) by an annualised 18% over the past 20 years.

‘My passion in our business is for our customers. The people and the products drive me every day.’ Richard Dube, store manager and co-owner of CTM Boksburg

On meeting the management team of Italtile, you quickly realise they are custodians of shareholder capital with whom you would be happy to partner. They have a long-term vision for the business and are driven by a passionate quest for improvement. They are straight-talking, act with integrity, and have a successful track record of executing their strategy.

The leadership team also understand that the key to success of the business is their people, which is why they focus on values as well as ongoing training and skills development, and have an approachable CEO. Great companies also understand why they do what they do. In their own words, they are in business to ‘give every South African a beautiful home’.

While the founder of Italtile, Mr Gianni Ravazzotti, is no longer involved in the daily management of the company, his legacy remains ingrained in the culture of the business. He remains the largest shareholder, owning 41% of the company. This ownership structure reinforces a long-term view when it comes to building the business and relieves management of the pressure to appease analysts’ short-term earnings targets.

3. An attractive price relative to the long-term return potential of the business

While the relationship between price and value holds the ultimate key to investment success, it is not the first or only characteristic we look for in an investment. It is the last check, based on a realistic set of expectations of the company’s profitability and growth prospects, to ensure we aren’t overpaying for a business.

We first invested in Italtile in 2014 at around R9 per share. At the time it wasn’t necessarily cheap, trading on a price to earnings (PE) ratio of around 15x. Valuing companies on PE ratios alone is overly simplistic. We believe that it is fundamentally flawed to buy a company just because it trades on a low PE. Companies that generate high returns on capital and have significant growth opportunities to redeploy retained capital at attractive returns justify a higher PE. If Italtile can sustain its high return on equity (which we believe it can due to the strength of its economic moat), buying the business at a PE of 15x is likely to have been a bargain.

We have increased our stake in Italtile at attractive prices over the past year.

Since our initial investment, the share price has appreciated 55% as earnings have continued to grow (as shown in Figure 1). Over the past year, the share price has lagged the overall market and we have used this rare opportunity to increase our stake in the business at very attractive prices.

Figure 1: Italtile has shown steady earnings growth, while the share price has lagged the market 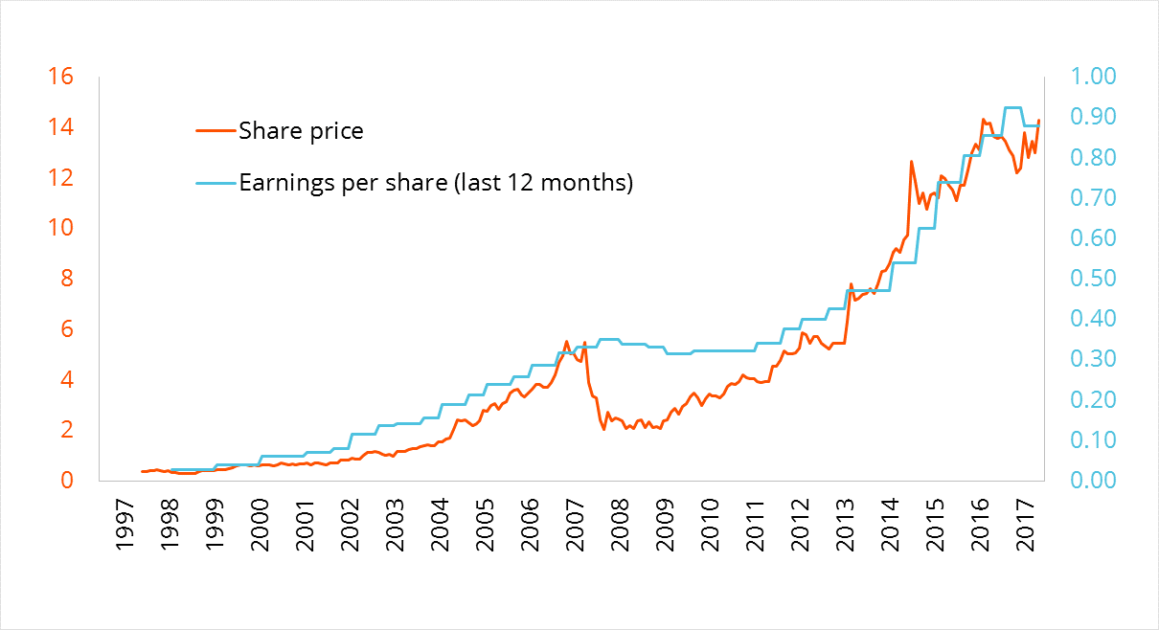 Denker Capital is an authorised Financial Services Provider, and an appointed investment advisor to Sanlam Investment Management (Pty) Ltd an authorised Financial Services Provider.   The information in this communication or document belongs to Denker Capital (Pty) Ltd (Denker Capital).  This information should only be evaluated for its intended purpose and may not be reproduced, distributed or published without our written consent.   While we have undertaken to provide information that is true and not misleading in any way, all information provided by Denker Capital is not guaranteed and is for illustrative purposes only.  The information does not take the circumstances of a particular person or entity into account and is not advice in relation to an investment or transaction. Because there are risks involved in buying or selling financial products, please do not rely on any information without appropriate advice from an independent financial adviser.  We will not be held responsible for any loss or damages suffered by any person or entity as a result of them relying on, or not acting on, any of the information provided.