Oracle Corporation – why we believe its valuation is attractive

Since its establishment in the 1970s, Oracle Corporation has been a leader in database software. However, the introduction of cloud-computing software or software-as-a-service (SaaS) a few years ago has threatened its success. Oracle’s initial attempts to transition to the ‘cloud’ led to a stall in revenue growth and a drop in operating margins. Since then, its cloud capability has kept gaining traction. Revenue has started to improve and margins have stabilised. We believe Oracle’s profitability will gradually recover, and since it is trading at a significant discount to what we believe it’s worth, we still see it as an attractive investment.

Four decades since its launch, Oracle has a solid grip on its market.

Oracle is a market leader in relational database management software.

Replacing an Oracle database is very risky, because it normally involves critical business data. It is also expensive, because the applications linked to the existing database must be re-written and re-integrated. Therefore, most Oracle clients who choose to implement new application software prefer to build it on top of their existing Oracle database. This means Oracle’s database software becomes entrenched in the company’s business processes, encouraging client loyalty and support.

While Oracle remained focused on its on-premise database software offering, a new generation of competitors offering software-as-a-service (SaaS) products became more prominent. Clients no longer needed to buy a five-year, on-premise licence, but could simply sign a pay-as-you-use agreement with a SaaS company who would host and maintain the required software in the cloud. One of the best-known examples of SaaS is Google’s Gmail service.

Concerns about the transition to the cloud led to weak share price performance.

When Oracle started to transition a big part of its business to the cloud, the market was sceptical of its ability to do so successfully. The company’s share price therefore underperformed substantially between 2011 and 2014. Over this three-year period, its price to earnings (PE) ratio dropped from 15x to 11x. Over the same period, the global developed market’s PE ratio increased from 12.5x to 14x.

Oracle’s revenue from on-premise licences, which it had relied on for so long, was starting to decline. Cloud revenue was growing, but not fast enough to offset the decline in on-premise licence revenue. As shown in Figure 1, Oracle’s operating margin compressed as the company invested in developing and marketing its new cloud products as well as in the data centres needed to host these services.

Figure 1: The decline and stabilisation of Oracle’s operating margin (2012-2017)

Why we believe Oracle will keep recovering and still offers value.

The revenue from Oracle’s cloud business is increasing steadily.

Oracle appeared on our valuation screens in early 2014. We followed the change in revenue closely. In August 2016, Oracle reached an important milestone. It was the first quarter where the increase in total cloud revenue outweighed the decline in on-premise licence revenue. Figure 2 shows the net effect – it was a turning point in Oracle’s overall revenue generation. 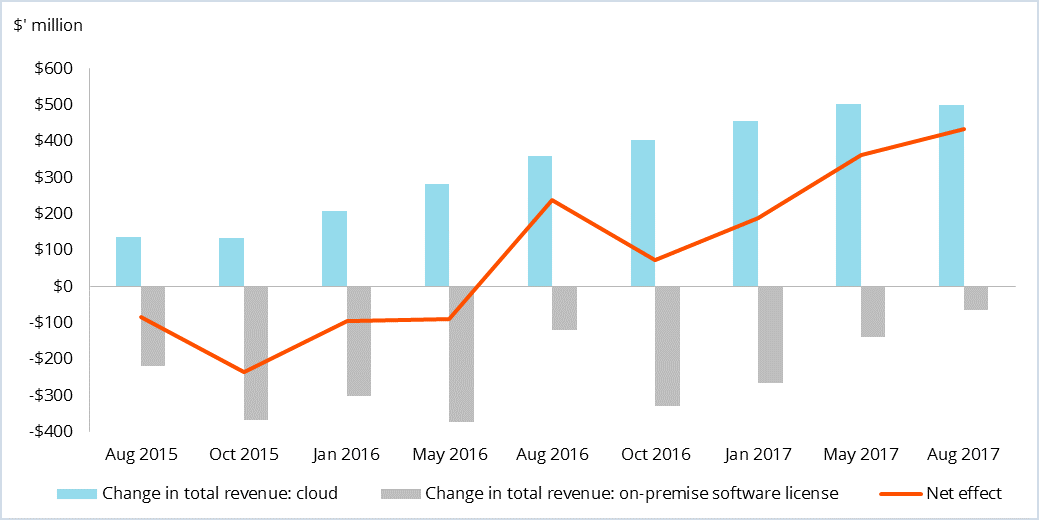 Considering the scope for growth for the cloud business, Oracle’s overall profitability should gradually recover.

At the point that Oracle reached this milestone, margins were still under pressure as the cloud business, although growing rapidly, was (and still is) at a sub-optimal scale. Management indicated that the gross margin from SaaS products would rapidly improve as they grow into the new cloud infrastructure capacity. Since August 2016, this margin has expanded from 58% to 67%, and management is targeting an 80% gross margin by the end of 2018. We believe this is achievable and that it will contribute to a gradual recovery of Oracle’s overall profitability in the medium term.

We believe Oracle’s cloud transition strategy will continue to gain traction and that its revenue growth and operating margin will start to recover as the cloud business gains scale. In our opinion, Oracle’s valuation remains attractive. At a price to free cash flow ratio of 15x, it trades at a significant discount to global developed markets and other software providers that have already successfully transitioned to the cloud. We therefore remain invested in Oracle on behalf of our clients in the Sanlam Global Best Ideas Fund.

Denker Capital is an authorised Financial Services Provider, and an appointed investment advisor to Sanlam Investment Management (Pty) Ltd an authorised Financial Services Provider. The information in this communication or document belongs to Denker Capital (Pty) Ltd (Denker Capital). This information should only be evaluated for its intended purpose and may not be reproduced, distributed or published without our written consent. While we have undertaken to provide information that is true and not misleading in any way, all information provided by Denker Capital is not guaranteed and is for illustrative purposes only. The information does not take the circumstances of a particular person or entity into account and is not advice in relation to an investment or transaction. Because there are risks involved in buying or selling financial products, please do not rely on any information without appropriate advice from an independent financial adviser. We will not be held responsible for any loss or damages suffered by any person or entity as a result of them relying on, or not acting on, any of the information provided.