Global financials have consistently grown shareholder value over the past decade and are well placed to continue to do so. Yet, the market remains sceptical about this sector, focusing on the troubles of the past rather than the adjustments and corrections that have already been made. This has led to a significant mispricing of quality financial stocks with attractive long-term potential. This is exactly what we look for in managing the Denker Global Financial Fund and has enabled the fund to build its award-winning long-term track record of outperformance

Investors are sceptical about global financials, not recognising their long-term potential.

Since 2008, the Denker Global Financial Fund (previously known as the Sanlam Global Financial Fund) has generated a compound annual growth rate of 15.8%. In fact, the fund has won numerous international awards for exploiting opportunities in financials globally. Its most recent award, the Lipper Fund Best Fund of the Year Award received in March 2019, recognises the excellent returns generated by the fund in the financials sector (for the three years to the end of February).

Despite this stellar growth, it remains an almost impossible task to convince investors and asset consultants to invest in a global financial fund. Interestingly, the sector shows more potential upside now than it did at the end of the 1997-2002, 2003 or 2008 crises. In this article, I will:

Global financials have been de-rated despite consistently growing shareholder value.

Despite all the headwinds, global financials have continued to grow shareholder value at around 8-15% per annum since 2008. However, as shown in Figure 1, the sector has been dragged down, unjustifiably so. There are two important measurements to consider in this context: 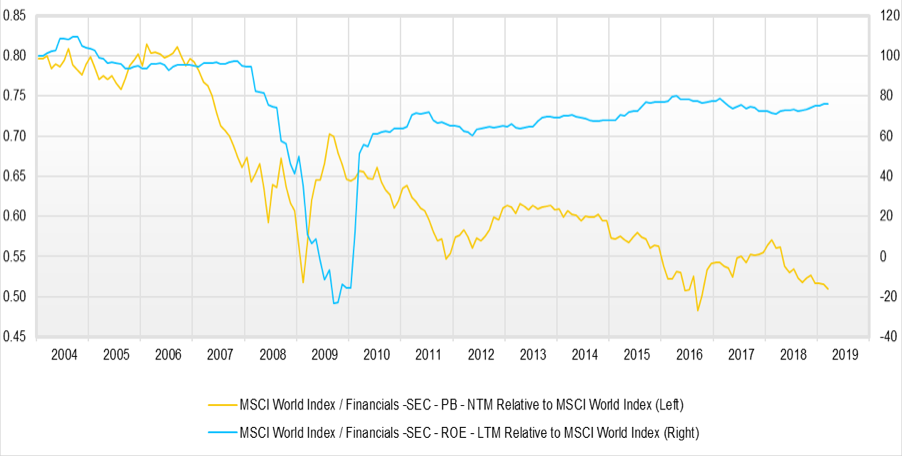 Negative press is the key reason for the market’s mispricing of global financials.

The press has been focusing on the sector’s troubles – such as accounting changes, increased scrutiny, higher regulatory burdens, lower growth and lower interest rates – while ignoring the fact that companies have successfully responded to these challenges. The adjustments have been made, good management teams have sold off or closed units with low profitability, and efficiency levels have improved (mainly through technology). Banks and insurers now have cleaner balance sheets and better reserves than they have had over the past 30 years.

However, the negativity instilled by the media is preventing a rational appraisal of what the sector has already done and its potential future returns. Besides the negative emotional association with global financials, the complexity introduced by new accounting statements has created information asymmetry. As a result, most investors see this asset class as ‘too hard’ to assess for investment.

Based on our experience, the team’s research, and our discussions with companies’ management and role players, we believe that the market’s valuations are wrong, and that global financials offer attractive prospects. And the fund’s track record of almost 20 years proves that we are experts in exploiting these prospects. Over this period the fund has:

Over the years, our team has made the financial sector our circle of competence. We combine this focus with a philosophy of finding companies that:

This philosophy helps us find future winners that are currently mispriced due to the market misunderstanding their future earnings potential. These companies are not necessary well known – I would guess that only 5 of the top 15 investments in the fund are familiar to most investors. For example, companies like TCS, Essent, TBC Bank, and One Savings Bank (to name a few) are reporting excelllent results, but they remain mispriced.

The fund is diversified across many geographies (the US, Europe and emerging markets) as well as across different entities in the financial sector, including banks, insurers, financial services companies, debt collectors and exchanges. Nevertheless, you’ll find a common thread among all the holdings:

The combination of a tried-and-tested recipe, specialist expertise, and many years of experience gives us the confidence to take advantage of short-term market mispricings for investors.

Find out more about the long-term opportunities available through the Denker Global Financial Fund.

Moneyweb explains our approach and why we have competitive advantage.

Your choice of investment manager affects your outcome We believe that investors need to take the time to understand their...