Factors that have, and will continue to, contribute to the performance of the South African equity market

It has been a tough year for South African equities – by the end of November the FTSE/JSE All Share Index had delivered -12.6% for the year. This follows a few years of already muted performance – for the five years to the end of November the market had realised an annualised return of only 5.5%. Can we expect a turnaround going forward? The answer depends on several factors, of which two are key: changes in the market’s price to earnings ratio, and companies’ ability to grow their earnings over time, which in turn depends on the global and local growth outlook. In this article, we discuss how these factors affect local equity performance and what this may mean going forward. While there is no crystal ball, there are pockets of opportunity. Diversifying and maintaining a long-term view can help investors exploit these.

1. The change in the ratio of price to earnings.

Changes in the price to earnings (PE) ratio is the most important contributor to equity market performance in the short term.

If any of these factors change, investors will adjust how much they are willing to pay and share prices will adjust accordingly. For instance, if a company’s growth prospects turn out to disappoint, the value of the company’s shares will decline. Similarly, if required returns rise because risks have increased or risk tolerance has reduced, the value of the company’s shares will also decline – even if expected cash flows have not changed. These changes cannot easily be predicted with much accuracy in the short term.

Figure 1 below illustrates the strong relationship between the change in the PE ratio and the total annual return offered by the FTSE/JSE All Share Index (ALSI) since 1960. Roughly 65% of the variation in total return can be explained by changes in the PE ratio. It is also evident that the decline in equity market values throughout 2018 has been the result of a consistent fall in the PE ratio. There are various possible reasons why the PE ratio declined:
• deteriorating growth prospects, or
• less certain future cash flows, or
• increased risk aversion, or
• higher required returns, or
• any combination of the above.

What we can say, is that if (and only if) growth prospects have not changed, then the local equity market offers the potential for higher returns today than it did at the end of 2017.

Figure 1: One-year total returns of the ALSI are highly correlated with changes in the market PE ratio

Looking forward – we cannot predict when and how the PE ratio will change.

Assessing the prospects for the JSE for the next year is largely dependent on what happens to the PE ratio of the market. However, the PE ratio is affected by changes in a range of unpredictable factors, including long-term interest rates, politics, growth expectations, and investor risk preferences. This makes it almost impossible to predict short-term market returns.

Over longer periods of time, the prospects for the equity market depend on the ability of JSE-listed companies to grow earnings.

Although changes in the PE ratio remain an important influence over a five-year investment period, other factors become more important contributors to returns over the longer term. The market’s ability to generate earnings growth over five years is far more important than it is over a shorter investment horizon. Investors who invest in the equity market for the long haul therefore need to formulate a reasonable expectation about growth as it is realised earnings growth that drives realised return. We illustrate this in Figure 2. For example, between November 2013 and November 2018, the market grew earnings at a modest annualised rate of approximately 4%. Over the same time the PE ratio declined from 18.0x to 16.7x. Dividends contributed roughly an additional 3% to total return. Higher PE ratios, all else equal, make it more difficult for investors to earn attractive returns from the market. This is because a decline – rather than a further increase – in the ratio is more likely from such high levels, which translates to lower returns. 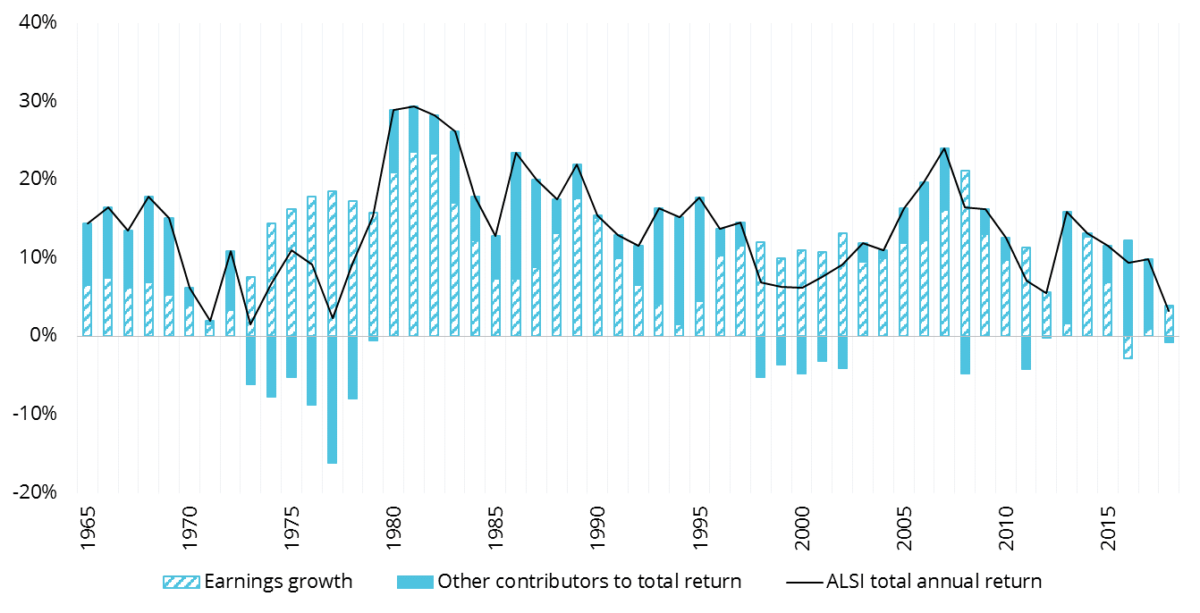 An improved local and global outlook will support companies’ earnings prospects and, as a result, equity investors’ return prospects.

Before the 1994 elections, South Africa’s growth was largely independent of the global economy.

Since the global financial crisis, South Africa’s growth has decelerated, while the rest of the world maintained growth in excess of roughly 3%.

The global economy recovered after the financial crisis, but South African growth did not recover to its pre-2008 rates. There are a multitude of underlying causes to this decoupling of the local economy from the global economy including:
• the constraints imposed by generally more expensive and less reliable energy,
• the drought in the Western Cape,
• political uncertainty,
• lack of consumer and business confidence,
• less disposable income in households, and
• higher taxes.

Reform is essential to support growth, but the market’s initial optimism following Ramaphosa’s election in 2017 has waned.

To get the economy growing again, South Africa needs to pursue economic policies that encourage and enable a more competitive economy. A competitive economy will enable South Africa to once again participate in, and benefit from, global growth. The global economy has more or less consistently grown output, with the exception of 2008. If the growth of the South African economy is recoupled to that of the global economy through reform, it can indicate improved future growth. This will be good for equities, since it will affect both the PE ratio in the short run and earnings in the long run.

However, we are yet to see sufficient reform. Following the ANC conference and the election of Ramaphosa as president of the ANC in late 2017, the market anticipated substantial reform and repriced domestic-focused companies accordingly. Although some notable changes have been made at Eskom and other key institutions (including the appointment of a credible advocate to lead the National Prosecuting Authority), the market remains weary of pricing for faster growth, since reforms have lagged what was initially expected.

The global outlook is uncertain while the local economy continues to lag.

Economic policy across the globe is shifting, and the impact of this remains unclear. In addition, technology is disrupting the established way of doing things, benefiting some while making others obsolete. For example, investors in Amazon have benefitted from its gain in market share following the rise in convenient online shopping, while investors in traditional retailers have lost. On the local front, we have not seen the reforms that the market initially expected, and the significant scope of what needs to be done to achieve faster growth is becoming more evident. An indirect positive influence from global economic policy reform and an uptick in local growth will certainly support the local equity market, but the timing and scope of this is uncertain at this point.

While the outlook for local equities hangs in the balance, diversification and a long-term view remain key.

The factors we discussed in this article provide a helpful guide to know what to look out for when it comes to evaluating the South African equity market. However, since it is unclear how these factors will unfold in 2019, it is challenging to make informed decisions. The best way to navigate this uncertain environment is to remain well diversified and to stick to your long-term investment plan.

Contact us to find out how we can help you make the most of opportunities in the local equity market.

Our general equity fund (currently known as the Sanlam Investment Management Value Fund, to be re-named to the Denker Sanlam Collective Investments Equity Fund in January 2019), has a much broader investment universe to choose from than larger managers who are subject to scale and liquidity constraints. This means we can invest in attractive small- and mid-cap stocks and are nimble enough to act on opportunities as they arise. Contact us to find out more about the fund.