Eskom’s operations are not sustainable. By our estimates, since about 2015 there has been insufficient cash generated internally, to operate the business, maintain all the plants, grow capacity, and pay creditors the interest due. This is a real threat to the ability of Eskom to roll its debt facilities. In this piece we propose a way to restructure Eskom debt, solve their balance sheet challenges and free up cash resources.

Can you imagine an Eskom situation where virtually nobody is worse off?

This is (literally) a billion-dollar question. Imagine investors (largely South African employees/pensioners), government (leaving more for beneficiaries of expenditure – the poor) and the private sector (employment creators) being better off – and hopefully reduced loadshedding as additional generation is brought online (leaving just about everyone better off).

First, Eskom’s severe cash flow problem will have to be solved.

Eskom’s financials reflect an asset base of R782bn of which property, plant and equipment constitute roughly R662bn. The next two largest items on the asset side of the ledger are inventories at R38bn and accounts receivable of R24bn. On this asset base Eskom generates R204bn in revenue. It incurs primary energy costs of R116bn, pays employee benefits of R33bn and pays other expenses of R24bn. This leaves cash operating profit (before interest, depreciation and taxes) equal to R31bn. Eskom’s debt securities and borrowings outstanding are recorded at R402bn and finance costs paid (from the cash flow statement) amount to R37bn. Cash interest costs exceed what the business generates from operations¹.

Figure 1: Eskom’s cash sources and uses show that it has a severe cash flow problem. 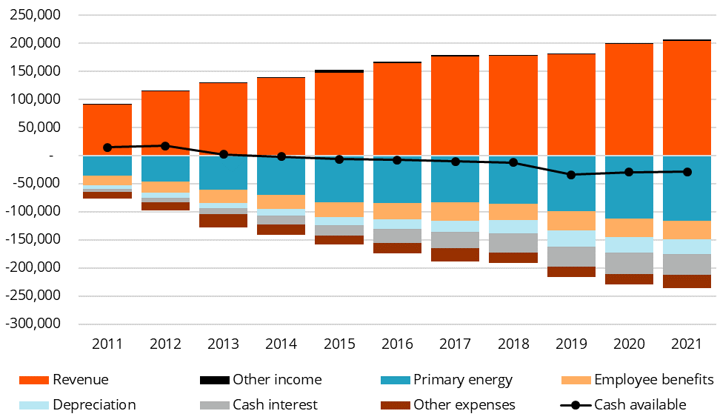 In any other case you would expect a business with these cash flow problems to go to shareholders for additional capital. But government, the sole shareholder of Eskom, is itself financially constrained and cannot continue to inject equity and/or subordinated loans.

Complicated default clauses and Treasury having guaranteed much of Eskom’s debt complicates things.

National Treasury has guaranteed around R350bn of Eskom’s debt. Complicated cross default clauses apply to these guarantees. Given the cash flow constraints at Eskom, it becomes more and more likely that Treasury will be called on to honour the debt guarantees. Apart from this impact on Treasury, debtholders’ claims are secured by a mix of Eskom’s assets – assets that are employed in either generation or transmission. This security, held by the debtholders, complicates governments’ proposal to unbundle Eskom into three separate entities – Generation, Transmission and Distribution.

We believe it is possible to solve Eskom’s balance sheet problems by converting all debt to equity.

Debt is one of the ways in which assets are funded. Debtholders have a priority claim on the cash generated by the business. Equity investors stand at the back of the queue and receive all residual cash flows. If there is no residual cash (as is the case with Eskom) debtholders become de facto equity investors. We believe that this is the appropriate course of action for Eskom – convert all debt to equity. Doing so would immediately free up cash resources within Eskom. Although the business would still generate a subpar return on its assets, the immediate cash drain would be relieved. If Eskom didn’t have any interest obligations, figure 1 would look quite different.

National Treasury could honour its guarantees to debtholders with a series of put options structured to give current debtholders a guaranteed return equal to the current debt and potential for additional returns.

Treasury could issue a series of put options to the new equity investors/partners with strike prices and maturity dates calculated to generate a return of no less than the relevant bonds to the maturity date of each debt instrument. A put option means that Treasury has the obligation to buy the equity back at some predetermined price and date if the holder of the put wanted to sell. For instance, if you held an Eskom bond that yields 10% until December 2022 the put option would be issued to mature in December 2022 (on the same day) and would have a strike price 110% of the equity price on issue. If the equity value of Eskom on that day exceeds a 110% of issue price you would not wish to sell your share. If the price is less than 110%, Treasury would buy the share at 110% and sell the share in the market at the prevailing price. This means the current debtholder is guaranteed a return equal to the return currently on offer on the debt, but with potential for additional returns if the cash retained in the business improved Eskom’s prospects. This leaves the current owner of the debt security no worse off, but potentially better off than the current arrangement.

If the retained cash is used to add value, it also means that the risk to National Treasury is reduced.

Given the cash constraints at Eskom, National Treasury might well be making capital injections to pay interest and might have to honour the guarantee and settle the maturing capital amounts. Under the proposed put option, National Treasury would only be liable for the difference between the prevailing market price and the strike price that guaranteed the current debtholder the bond’s return at maturity.

For simplicity we assume a five-year maturity, 10% coupon bond and that Treasury covers all interest and capital repayments.

The newly issued equity should be listed on the JSE and would trade freely and separately from the put options. This would ensure that investors can decide for themselves which mix of securities they want to own. The business could and should still be unbundled into separate entities, but this could be done after listing and the options could/would be adjusted so that no investor is left worse off. The conversion to equity before the unbundling ensures that all shareholders retain the security of the underlying assets in totality.

Shareholders have the right to constitute boards and implement value adding and sustainable operational strategies. In essence a change in the regulatory regime would be necessary and very helpful to unlock value. Transmission is a natural monopoly and NERSA’s focus should shift away from generation/electricity price determination to creating a framework that minimises consumer welfare losses from the monopoly in Transmission. Ideally, SA would embrace competitive generation and trust the competition authorities to intervene in generation should it be necessary.

There are challenges and benefits that come with our proposal.

Below is a summary of the potential benefits for all stakeholders.

The above achieves a nice alignment of interest between past and future shareholders, and everyone is better off if the businesses are managed to generate sustainable returns.

In the interests of a balanced viewpoint on the proposal, below are some possible objections.

A more sustainable fiscus should (all else equal) reduce long-term risks.

A debt restructure or put differently, a simple acknowledgement of the status quo and what we can do about this has several advantages for Eskom, National Treasury, current debtholders, and South Africans en masse. It will force better governance and more sustainable and competitive operating strategies.

Legal and technical challenges aside, the biggest challenge is one of inertia.

Technically, the above objections can be solved – there are lots of balanced funds and/or flexible funds for whom these constraints would be irrelevant. Legally, the challenge of whether this conversion would mean a technical default would need to be explored – again this can be overcome if there is a will to do so. The thing that would need to be managed is the complicated cross-default clauses on government guarantees to other State-Owned Companies (SOCs).

The biggest objection to overcome is the willingness to acknowledge the scale of Eskom’s problem and a commitment to solve this structurally.

Not just in terms of Eskom’s issue but the ideology around state control. Currently, state-owned company staff are very well remunerated and enjoy opaque accountability, not to mention procurement processes that enrich and protect vested interests. This lends itself to inertia, politically and in terms of an appetite to embrace change. But can we collectively afford this?

¹ We have not even mentioned the depreciation charge of R28bn, which in a normal business would be equivalent/similar to stay-in-business capex. For an ungeared business to be sustainable there needs to be sufficient operating cash flows to pay all costs of production and stay-in-business capex. A business that incurred debt needs to generate sufficient cash to pay production costs, capex and the interest bill.

The opinions expressed above are those of Madalet Sessions and do not necessarily represent those of Denker Capital.

The information above belongs to Denker Capital and may not be reproduced, distributed or published without our written consent. While we have undertaken to provide information that is true and not misleading in any way, all information provided is not guaranteed and is for illustrative purposes only. We will not be held responsible for any loss or damages suffered by any person or entity as a result of them relying on, or not acting on, any of the information provided. Use or rely on this information at your own risk.