In times like these, where uncertainty and volatility dominate market news, it is easy to become overly focused on the macro picture and fall victim to fear. But it is difficult to predict the impact that economic news will have on investment returns. Good economic news doesn’t always mean better returns; similarly, bad economic news does not necessarily mean low returns. The important thing is to be mindful of the macro news, to stick to key investment principles (such as diversifying), and to focus on the long term.

While macro events do not dictate our investment decisions, we do consider the bigger picture.

At Denker Capital, we follow a bottom-up investment philosophy. This means we look for quality companies, and we invest in these companies when they are attractively priced relative to their long-term return potential. This is opposed to a top-down approach, which starts by looking at the macroeconomic environment and then decides where to look for opportunities based on the macro trends. This however does not mean we turn a blind eye to macro news – we remain aware of macro developments at all times. But importantly, we do not try to predict macro events or base investment decisions on any predictions or forecasts.

Review of global and local markets for the second quarter.

Global equity markets experienced another relatively good quarter.
Nevertheless, performance was still more modest than in the first quarter (Q1). Looking at the performances of the indices in US dollars on a total return basis, the S&P 500 Index gained 4.3% and the MSCI World Index gained 4.2%. The MSCI Emerging Markets Index lagged again, closing only 0.7% higher this quarter. The surprising decline in long-dated developed market government bond yields, which started in Q1, did not subside. The yield on US 10-year maturity bonds declined from 2.4% at the end of Q1 to 2.0% at the end of Q2, and the yield on 10-year German bonds declined from -0.1% to -0.3%.

In the US, the Federal Reserve started hinting at rate cuts.
In late June, the Federal Reserve (the Fed) indicated that it might cut interest rates sooner than previously expected by removing the word ‘patient’ from its policy statement. It added that it would ‘act as appropriate’ to sustain economic expansion. President Trump has often taken to Twitter to share his exasperation with the Fed’s previous rate increases.

In the UK, Prime Minister Theresa May announced that she would step down as leader of the ruling Conservative Party.
Boris Johnson and Jeremy Hunt were in the race to replace May as leader (a race that Johnson has since won). Both candidates were positive that they could renegotiate the withdrawal deal with the European Union, which May has failed to do, and get it through Parliament before the expiry date of 31 October 2019.

Negative GDP growth cast a shadow over a peaceful election, exposing the true state of the economy.
South Africans went to the polling booth in May. The much-anticipated general election in May passed uneventfully, with the ANC securing 57.5% of the vote. In June, Stats SA published its GDP estimates. It showed that the economy contracted by 3.2% in Q1 – the largest quarterly drop in output since the financial crisis.

This has undoubtedly been one of the more anxious periods for South Africans. In addition to having to deal with electricity outages and a general rise in the cost of business in South Africa, corporates are under pressure to cut costs to protect profits and returns. Consumers are having to deal with higher VAT, and higher fuel and administered prices (such as electricity), which is affecting discretionary spend. Consumer and business confidence remain low. We remain cautious on domestic markets and do not see a dramatic improvement in economic growth in the shorter term. Although the risks surrounding Brexit as well as the US-China trade war are uncertain, lower interest rates could support global growth in the short term.

What could improve the outlook for South African equities?

For now, the local growth outlook remains poor, which is not supportive of equities in the short term.
We generally do not forecast returns over short time horizons given the large margin for error. Having said that, assuming things continue along the same vein locally, it is hard to see the returns for the second half of the year matching what we have seen in the first half. For the return outlook to improve, local growth expectations must improve, while US and global growth expectations should not deteriorate significantly.

From a bottom-up perspective, earnings growth for SA Inc. will likely remain depressed.
Improved equity earnings will depend on GDP growth backed by structural reform. The consumer remains constrained and there seems to be very little respite on the horizon. Company margins are generally under significant pressure, with very little pricing power. The sense we get on the ground from our discussions with local management teams is that there is very little to bank on that will cause a significant improvement in local growth for the next 12 to 18 months.

To grow earnings and returns requires revenue growth, which ties back to the GDP outlook.
The figures below summarise this quite well. Figure 1 shows the trend of declining return on equity for the FTSE/JSE All Share Index (in spite of rising debt levels, which are shown in black). Figure 2 shows that, although sales growth has slowed, companies have managed to maintain profits through cost cutting and capex expansion – although at lower return levels. What we need is GDP growth, and for this to be sustainable it needs to be accompanied by this structural reform. We do not see any significant positive surprises to earnings growth over the next six to 12 months.

Figure 1: Return on equity (RoE) has almost halved since its peak in 2007 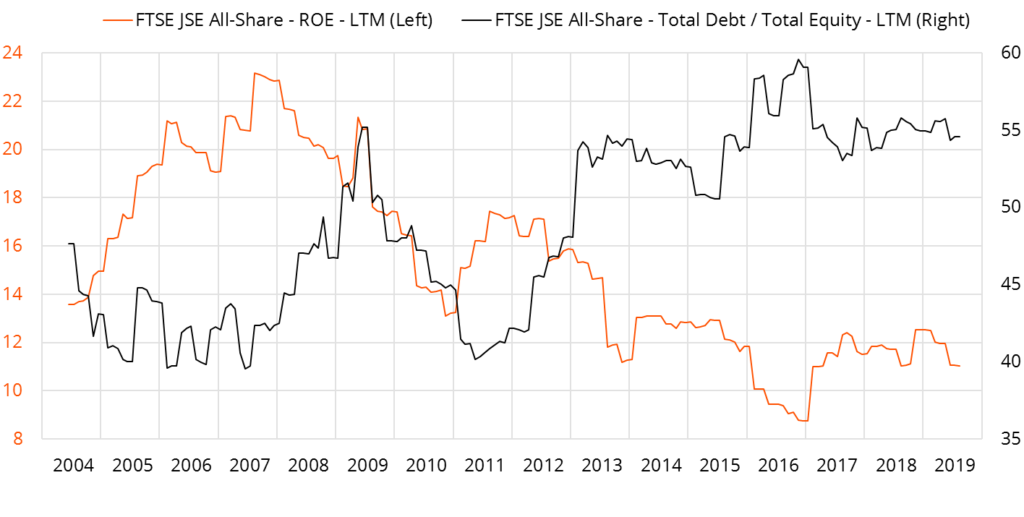 Figure 2: Companies have managed to maintain profits, even though sales growth has slowed. 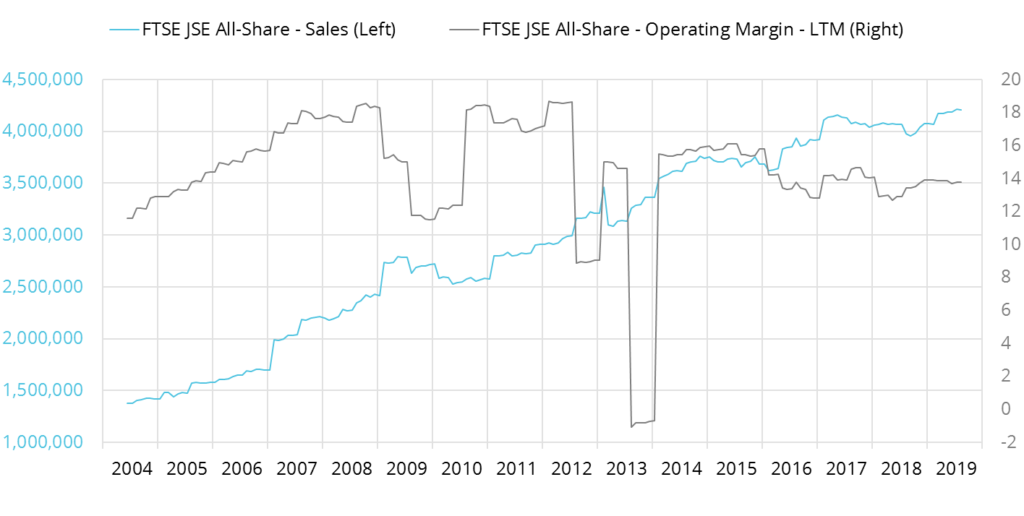 The other key driver of returns in the short term is rating changes (changes in price earnings multiples).
While some commentators may be inclined to suggest the recent ratings decline makes our market look cheap, the de-rating over the past three years is the market adjusting to lower growth expectations and the increase in the yield on inflation-adjusted bonds from 2% to over 3%.

We are starting to see some great opportunities emerging in SA Inc., particularly in the smaller cap stocks that have recently underperformed at a magnitude that we have only seen on two occasions in the past (see our previous article). We remain cautious about investing in some of the fallen angels that have severe structural challenges and are heavily indebted. We prefer to look for quality companies that have come under pressure and that will benefit from any improvement in South Africa’s economy.

In this environment we continue to seek out mispriced opportunities where we have above-average conviction. Our objectives are to ensure we focus on constantly improving the quality of our portfolios while reducing the risks related to unknown macroeconomic events. In a tough environment it does not pay to invest in poor-quality, highly geared businesses. We remain focused on sticking to our strengths, such as stock picking in an uncertain environment.

You can access the opportunities we’ve identified by investing in our Denker SCI Equity Fund. Click here for the latest fund fact sheet.

For this year’s Mandela Day we provided food to a local farm school. In honour of the tradition of Mandela...